What is Virtual Reality? Just about everything you’ll need to know.12 min read 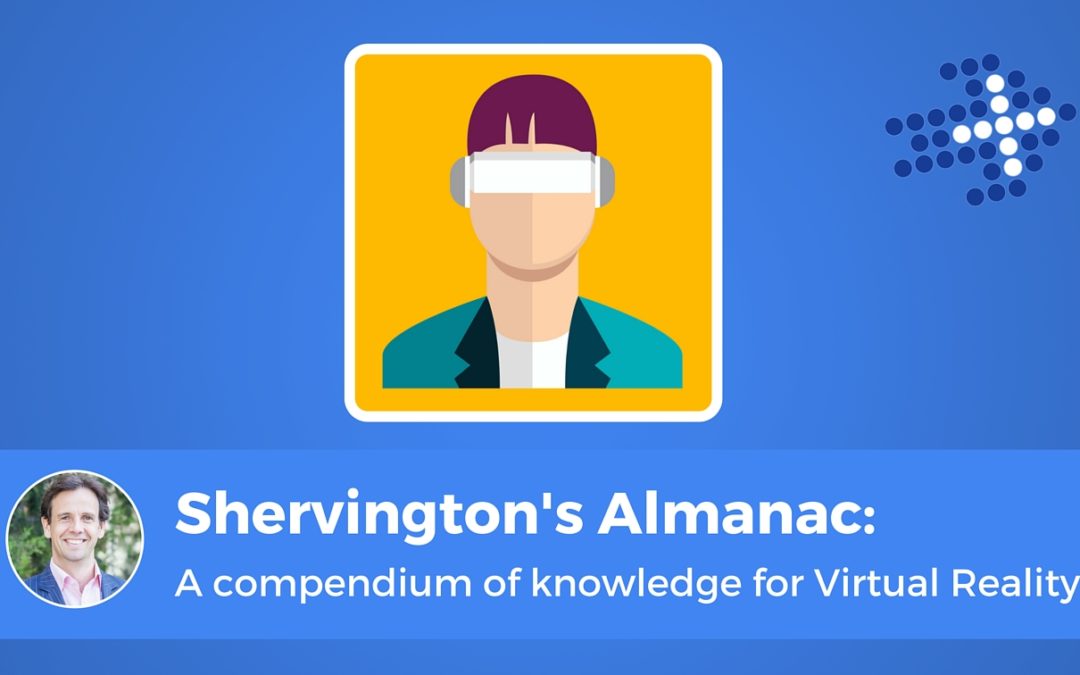 Just in case you’ve had your head in the virtual clouds, I thought I would pull together and build up a load of resources you may well find handy in relation to Virtual Reality.

Below you’ll see a load of links in relation to ‘Virtual Reality and Marketing’, some ideas for business and guides to Social Networks in VR that you are going to want to try out.

There is also an ever growing list of cameras, headsets and apps.
Hope it all helps to orientate you in this new world.

What is Virtual Reality?

“Virtual reality or virtual realities (VR), which can be referred to as immersive multimedia or computer-simulated reality, replicates an environment that simulates a physical presence in places in the real world or an imagined world, allowing the user to interact with that world.” (source)

Virtual Reality (VR) is the next platform, and you may well be surprised how developed the eco-system has already become.
If you haven’t tried it yet, then you are in for a mind altering experience.

Next we have Mark Zuckerberg letting us know this is a big play for Facebook.
They bought Oculus for 2 billion for a reason, and when you start to connect the dots you’ll see how your social graph (friends and family) on Facebook fits perfectly with virtual worlds where you can go anywhere in a blink of an eye.

In order to plug in, you’ll either have a tethered headset (i.e. linked to a powerful enough computer), or take a smart phone and slide it into headset.
There are very different quality of experience and right now ‘Oculus Gear VR’ is probably the best option in my view, but only compatible with certain Samsung phones. (see below)

With Google Cardboard bringing a taste of VR to the mainstream, we can see the race is on.
Just know, there is a radical difference in experience between a fully immersive headset, with hand sensors, and the entry level units.

Who is going to be using VR?

Putting it simply, someone will be likely to one day say ‘hey want to try VR’ – and depending on the device will be the nature of your first experience.

Google Cardboard type devices will be the gateway into VR for most people.
It will be the gaming market that gets truly plugged in though.
Mobile devices need recharging quite quickly with VR usage, and computers mean you can log in for much longer periods.
Social apps are a lot of fun (see below), and there is of course a whole world of adult content emerging.
(I’ll be doing stand-up comedy on that one soon enough…)

To bring everything together, I’ve broken it down in the sections below:
(I’ll update over the coming months/years)

Before we get to that…

Know this is something occurring where some Apps are not available in all places.

In essence, you may have an App available in the Google Play store (which means it can be used with Google Cardboard) but it won’t appear in the Oculus Store.

On another occasion, some apps (like Altspace VR – see below) simply won’t have a Cardboard compatible version available, but others you will find in all places.

As most users are using Cardboard (or similar) right now, it probably won’t cause an issue but wanted to let you know things are still evolving.

Finally, I am focused more on VR than AR right now as that is where my experience lies. I’ll do another post on AR once we know a little more what’s happening (especially with ‘Meta’ and ‘Magic Leap, later this year).

As such, I wanted to throw down a few Apps to get you started, especially as there are some really WOW experiences out there.

Ok, let’s start with my favourites:

The Oculus Store itself it amazing – a world in itself. And the app on the phone is super simple for surfacing content. Congratulations to the team that put that together.

There will be blog posts in their own right, but for now here are the basics…

There are 3 main players in this space:

Oculus Social Alpha – you hop into rooms which have up to 5 people in. You are a ‘floating head’ but it really works. Try it out for sure.
(you’ll find it in the Oculus Store once you connect your headset)

VTime (a ‘Sociable Network) – I love how chilled this is. They have created dramatic environments for people to sit and connect with fellow avatars. If you want to understand what is happening in Social in VR this is a must.
(there are some really fun surprises in the animations; I’m sure Ready Player One’s Halliday would approve.)

AltSpace VR – there is a 2D version as well as a VR one. Loads of rooms, lots of fun, and a really responsive group of community managers who act as your guides.

Even though I think gaming will be the most use initially for VR, I think that when Facebook and Google begin to connect people via existing Social Networks, the scene will start to become very interesting as global communication tools.

Due to the thirstiness of VR, headsets need a lot of processing power, and as such those that are ‘tethered’ will tend to give the most immersive experience, including the following.

Note: I’ve ordered them on their performance, not on a performance/price ratio – and have put the un-tethered ones first.

Samsung Oculus Gear VR: I’ve been using this now for around 6 weeks and think it is brilliant. Great construction, and easy to use.
You plug straight into the Oculus world, and we can only expect the social connections via Facebook (who own Oculus) to increase its value.

You do need a Samsung though (I have an S6) so that reduces ‘who’ can use it right now.
Although with the S7 being released this week (bundled with a Samsung VR Gear), people will start to find their way into the metaverse via this route more than before.

Defairy – I really like this headset. You can’t access the Oculus store, but it is really well constructed. It is definitely more immersive than the ones you ‘hold to your head’.

Google Cardboard – a classic. And well priced. But it is not as immersive as the ones above.
I even found it for $3 including delivery in the Geek App here (Android, but is on iPhone too. (note: cheap good means little hands people, little hands)

Promotional – there are loads of promotional type VR systems I’ve tried and they all give you the experience, like Cardboard, so more options there too. (Thanks to VR marketing Pro James Dearsley for sending me this one.)

3D printed headsets – you may even want to at having one made for you.

Then we have the tethered headsets…

Oculus (was ‘Oculus Rift’): you can buy the developers kits still, and the public release version will be in people’s hands early April ‘16 – click here for more. (you may have to wait a while as they sold out quickly)

I’ve tried the first and second developer kit versions and if the new ones are going to be better (which they will) then gamers will be very happy with the expenditure.

HTC Vive: I haven’t used this yet, but it looks great.
(There are now developer kits available)

It won’t be long until this space delivers more solutions, and we’ve heard Google are looking at a headset that doesn’t need a phone or a computer.

And with Apple eyeing up this space, well we know what that means. Some cool stuff will come our way soon enough. (with a price tag, of course)

This is just beginning but with projects like this:

Teslasuit – a full body suit that lets you feel in a virtual world (note: Kickstarter campaign was cancelled – I’m guessing they raised funds)

MyndGazer – this project will take your brain waves and display them in VR. Yes, taking ‘putting your data’ on the Internet to the next level too.

Around 10 years ago I discussed with entrepreneur Jon Bonnick how people would be streaming using their phones (think Periscope, and Facebook live).

(The thinking is not new, check it out from 2007, but now it is starting to happen.)

I would say that as alien as it seems, in another 10 years time people will be online all the time due to live streaming in our homes and workplaces.
People in business are talking about building transparency and trust, so imagine if people could access ‘the real you’, 24/7.
Ok, maybe it is a little sci-fi for today, and no need for us to take that leap quite yet.
For now we will see live streaming of content that we would pay to ‘go see’ – sports events, concerts etc.

NextVR has raised considerable funds for live streaming broadcasts, so we know it is on the way.

Livit – could be the next Periscope, but for VR. (news here)

With streaming ready fixed cameras like the one from ALLie we may well start seeing people streaming their lives online.
Update: June 2016 – you can easily stream to YouTube using Allie.

Storage is going to be pricey but with streaming services like Wowza.com we can see a model is in place.

This is the most difficult space to keep up with.

As such I may just start the list and add to it once I’ve tried them out, or had feedback from the community as to what is working well.

I expect the cameras will increasingly live stream, and eventually become the size of your pineal gland, but until then we have…

Many more cameras I’ve been sharing in this Google+ Collection (now with over 1.3 million followers).

And if you are interested in storytelling in VR (h/t Robert Scoble) here is a great guide.

As you can see, we are already familiar to the concept of VR.

So I thought I would start to collect movies I find about, or related to, VR in some way:

Uncanny Valley
The Matrix
Inception
13th Floor
Vanilla Sky
Existenz
Dark City
(please let me know what other ones to add, and a link to YouTube!)

Want to use Cardboard apps on your Oculus Gear VR?

Go to the play store and download a ‘Package Disabler’ which will in essence prevent the Oculus start up process. Open the app and check all the boxes related to ‘Samsung Gear VR’ (I searched for ‘Samsung’ to find them) – there may be a more precise way but this worked well.

You can then use Gear as Cardboard – i.e. start and app and add it in. Once finished uncheck the boxes once more.

For fun, I thought I would capture a few words that you will be using in relation to VR:

Presence – the most common word you will hear this year in relation to this is ‘presence’.
Immersion – as in, you feel immersed in these worlds
Immediacy – you can teleport to new places in an instant
Intimacy – you feel connected to the experience on an emotional level

The rumour is, plan by Google is for everyone to have access to VR, and we know AR is coming soon too.
The plan by Facebook and Oculus’ Virtual Reality is “how do they bring VR to a billion people”?
This is just the beginning.

Our imaginations create reality. We will enter new worlds.