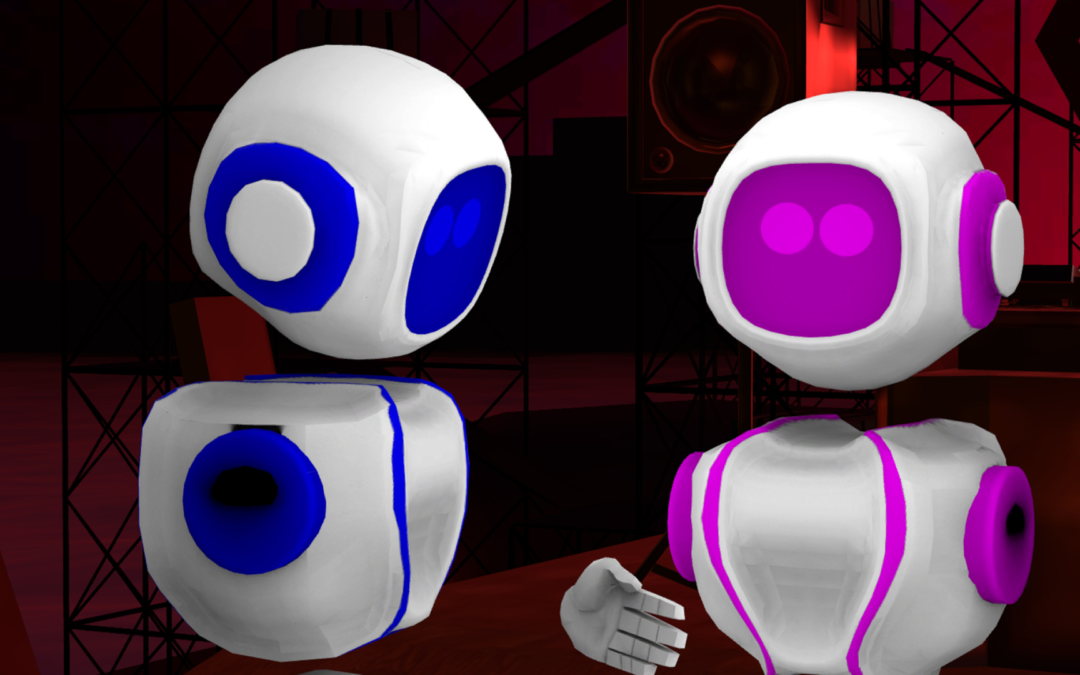 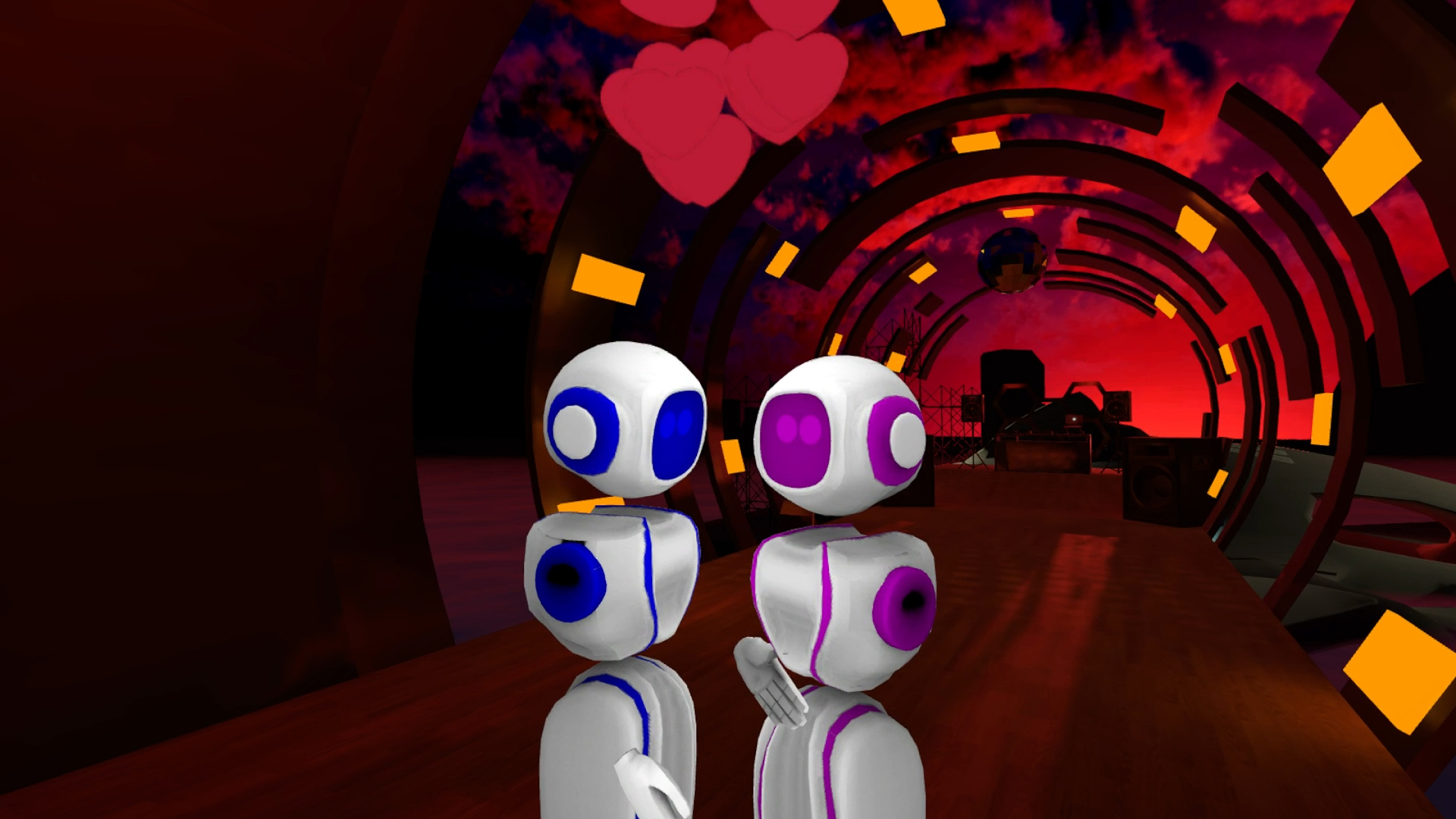 Myself and Elisa got married in Virtual Reality (VR) May 25th 2017, and had a section of a BBC documentary about us.
I’ve put together a video covering both:

If you would like to have more on the background to it all the below is a Q&A session I did for a journalist.

What was funny about how you met?

What was funny about how we met was how a mutual friend (Linda) sensed we would get on, and she was right.

We love to laugh and as I say in the wedding show, she loves the way I tickle her funny.

What attracted you to one another?

We have a huge amount in common – love comedians like Ricky Gervais and Rob Brydon, and musical favourites include The Stone Roses and Wales’s finest comedy hip-hop band, Goldie Lookin Chain (who played at the wedding in the night).

How long have you been seeing each other?

We met just over a year ago.

What did you closest relatives say about this decision?

Everyone is happy we have found each other – we make a great team.

We didn’t have any delays, and were married within a year of meeting each other. As Elisa says, “When you know it’s right, it is right.”

What did your wedding include — music, media “cake”? Etc.

The wedding day was structured like a reflection in a mirror.

We wanted to get married in a location that mattered to us both, so worked with our local florist/cafe/bar – Sunflower&I – to become a wedding venue.

Then, the virtual ceremony (stage 1), with headsets on, was experienced in this space – just across the road from my apartment (where everyone was watching).

Once that ceremony was finished, we reconnected and brought everyone to the venue for stage 2.

Effectively we ran two ceremonies as a mirror. The same readings, the same same music.

For instance, just before my final send off we played ‘Death of a Bachelor’ by Panic at the Disco.

There was a walk down the aisle in both ceremonies, to the music mentioned, and then after that…

Then for Elisa’s walk down the aisle we played Keane’s Hamburg Song.

In the VR wedding I included 2 clips that were then used as readings in the IRL ceremony by two of my closest friends.

These were ‘All you need is love’ by the Beatles, and then ‘Bring me Sunshine’ (which is a classic in British comedy, from Moorcombe and Wise).

A twist IRL was that they were read out, not sung, which added something special. This was whilst that was going on: https://goo.gl/photos/5KTCXa9yQSfHtUf28

In both myself and Elisa’s minds we have the memory of getting married in parallel, virtual and real world, which showed the plan worked really well.

Not everything was easy in the VR part, like the kiss, but IRL we were fine.

Then again, we didn’t get to see a sea of heart emojis from the guests in the real world, but there were a lot of smiles. 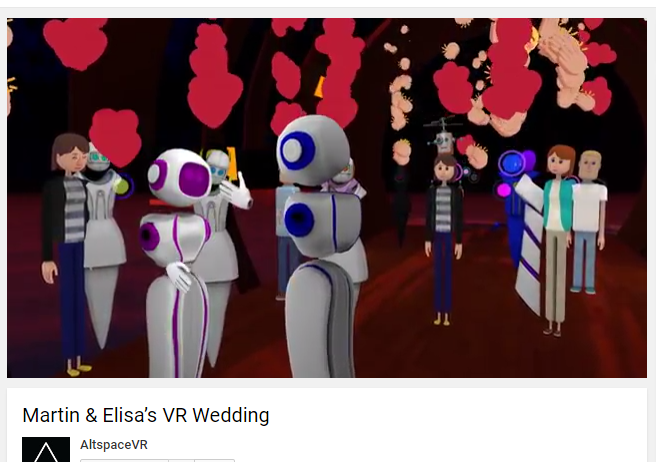 We had a very special cake made too: 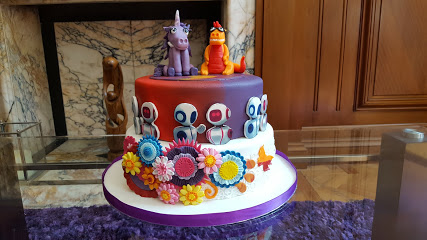 Why did you choose a dress and a suit if you weren’t going to see each other in them during the experience?

This was all part of the contrast we wanted to create – smart IRL, and Robot Avatars in VR. 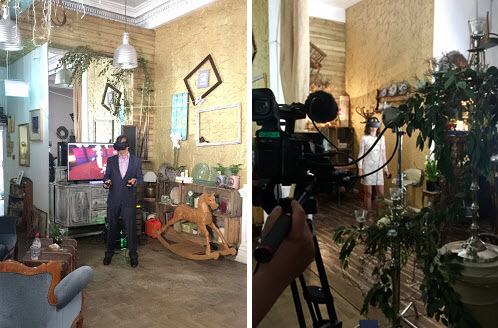 Throughout the days we captured many perspectives. There was a professional photographer IRL, and in VR we filmed the ceremony from a 3rd person perspective as well as from both of our own perspectives. 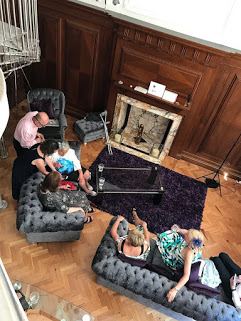 What did guests say after?

Our friends and family loved being part of it all, and people have reached out via Twitter that attended the VR part to say how much they enjoyed the show, like this:

What were the highlights?

The whole day was everything we hoped it would be, and more.

How much was your equipment total?

Could you explain the scene in your own words?

It is a futurist disco, with red skies and glistening disco ball. It is really emotionally uplifting to be ‘in there’.

Was it what you imagined? Did it fall short?

Yes, it was truly an amazing experience. Intense, and with us forever.

The team at AltspaceVR are truly incredible – they worked so hard to ensure the technology delivered, and it did.

The BBC team were respectful of our day, and worked with us well for months before.

What did the people thrilled about it say?

Friends and family loved being part of something new. There was a lot of laughter all day.

Any naysayers from older generations?

Some people we told were expecting us to be dressed up like robots and didn’t quite understand that we were the avatars.

Why no conventional wedding?

Effectively we had both a VR and more conventional experience brought together.

For some people, the hour long experience using more basic headsets (i.e. a smartphone) without having ‘hands’

Why is virtual reality more interesting than a traditional wedding?

Marriage is in the heart, and a wedding to us is the celebration of this. We wanted something personal, and VR gave us that opportunity.

How does it feel being pioneers?

VR was only one part of the overall experience. We had 7 teams working together – including a BBC production company – to pull it together. What may well be unique is how we were being filmed for a documentary (on Cardiff Bay) whilst being in VR doing a show based on video/audio samples, with that being live streamed to friends and family, with them in turn being filmed for the same documentary.

How did you get the idea?

When we announced our engagement a friend suggested we got married in VR as I’ve been blogging on this subject for a while. I reached out to AltspaceVR as I’d connected with their community manager (Lisa) before, and she loved the idea. It just flowed from there…

Why did you choose this futuristic disco?

We had to get special permission from the creator of the futuristic disco environment as I felt it was the most WOW place for the event. In VR….

Do you believe this is the first ever ceremony of its kind?

Monika and Hu Jo had the first Cyberspace wedding over 20 years ago.

What we did was create a two-world experience for friends and family to attend as guests, or watch live. This is a new approach.

Using the next generation of headsets allowed us to ‘have hands’ in VR, which increases the sense of psychological connected to the experience. When you combine this with the fact it was recorded in VR for future generations to attend as well, it is a first. We can even re-attend as guest ourselves.

Any other ideas you floated before this?

Who wouldn’t want to be a time travelling robot with the opportunity of revisiting their own wedding? The choice seemed the only way to go. “This is really cool!” That’s what we’d say to us* when we do revisit and see ourselves back in time.

(*this is a pattern I picked up from comedian Stewart Lee – ‘That’s what I’d say to me’.)

What do you think influences emotionally?

Every video we played (as a sample) was aimed to engage the emotions of the audience – and mainly, we want to make people laugh. Elisa got me doing a Rob Brydon impression last year, so I wheel that one out during the wedding as part of the story of when we met him… 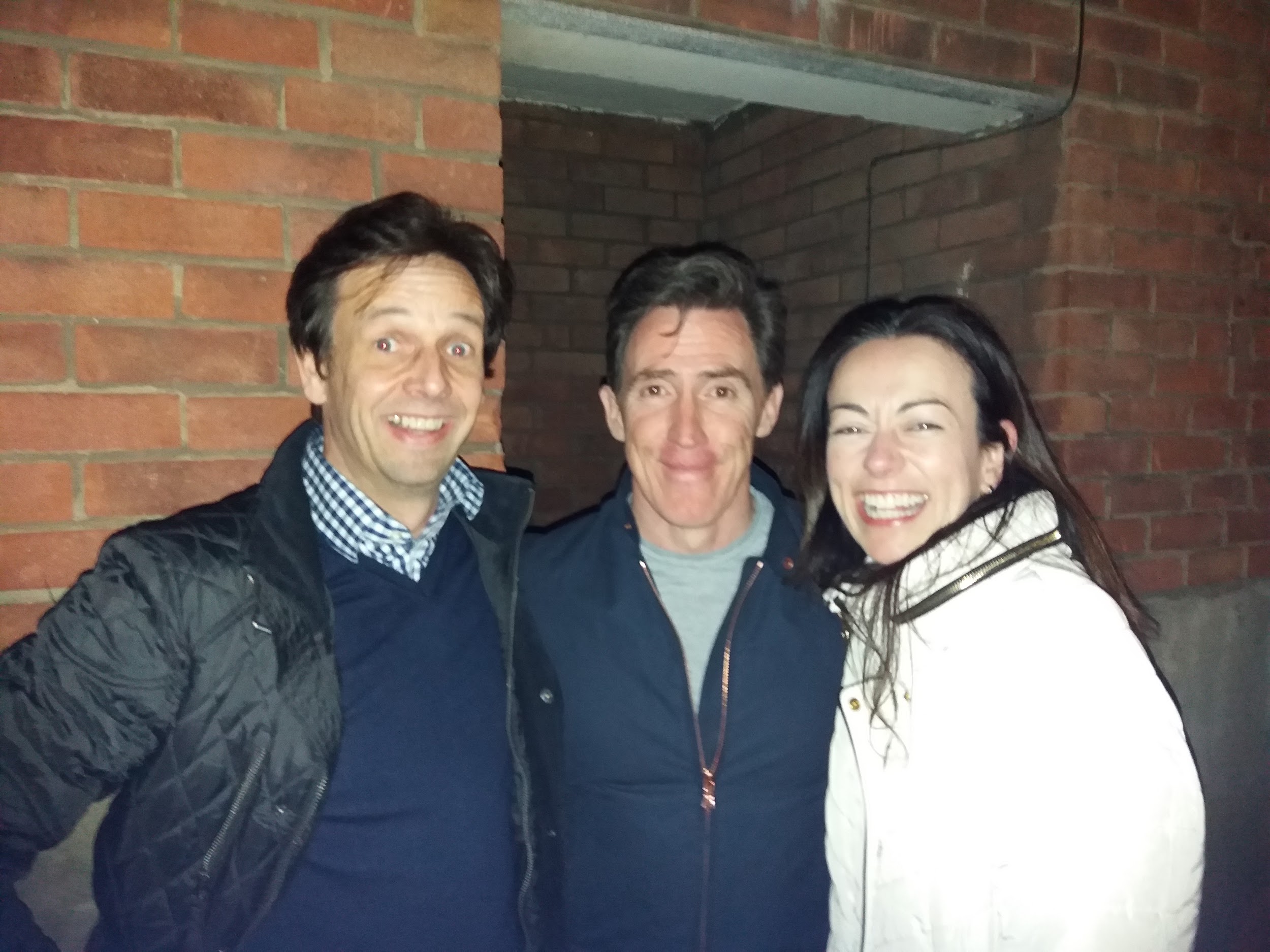 We also wanted to bring people in on some of the decisions we’ve had to make, thereby emotionally connecting to us both even further. We agreed a non-commercial deal with a production company, but turned down offers of other paid live TV appearances and sponsorship for the day.

This was our day and we wanted to make sure it stayed that way.

What are your interests in this zone – pop culture, technology?

I’ve been doing  stand-up comedy since 2010 – attending San Francisco’s Comedy College just about every year since, and I tend to write my content around the intersection of psychology, comedy and technology.

As a sci-fi fan I love time travel as a concept, so when I found out we could play across timelines in VR it got even more exciting to explore what we could do.
One example is during the event I mention how Elisa says she sometimes feels like Dr Who’s assistant, which was lovely as when Doctor Who was filmed outside my apartment this year, we had the good fortune of meeting Matt Lucas: 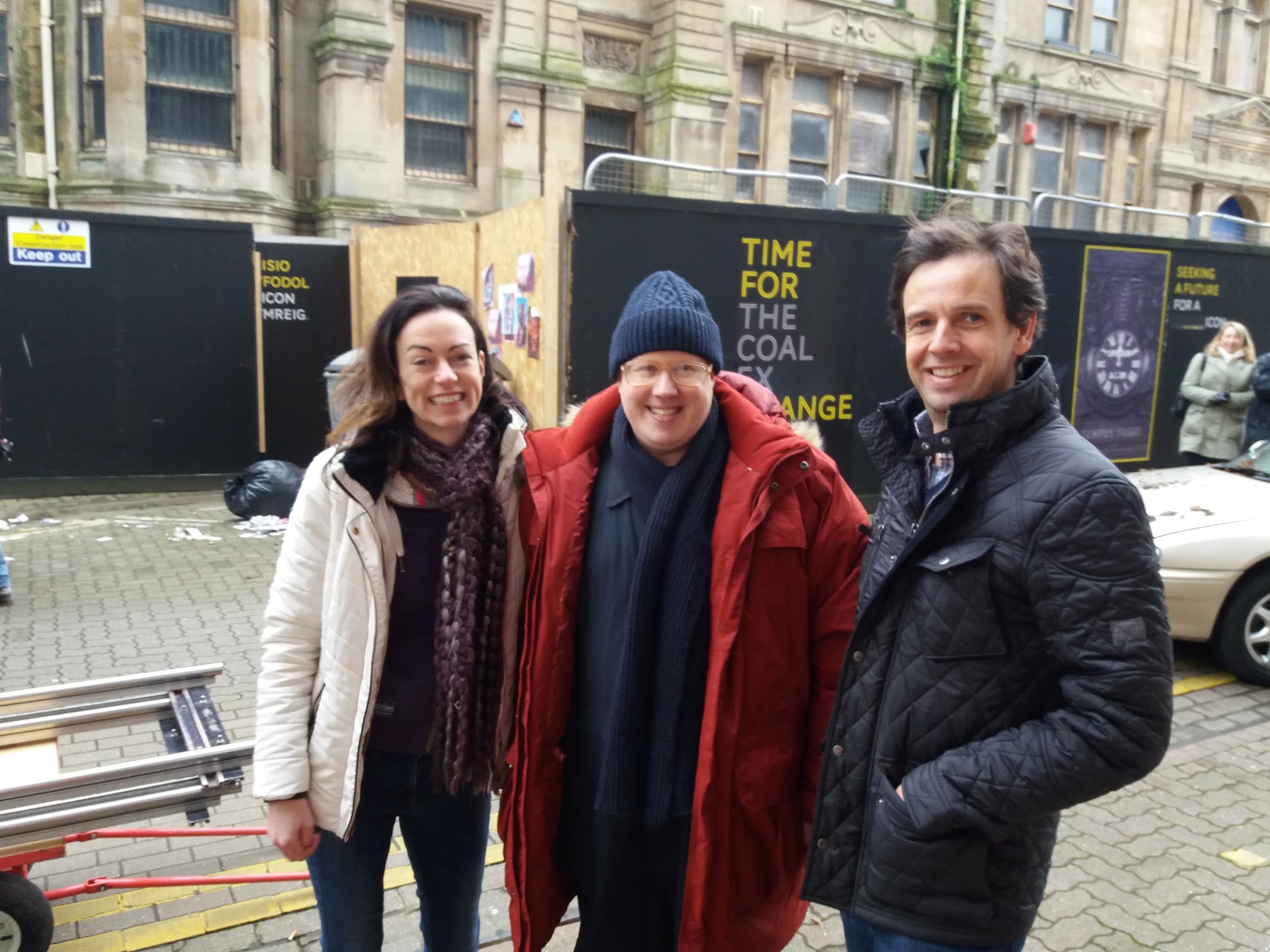 When I told this story in VR, I only had this ‘in writing’ on the screen but I now have ‘gone back’ and edited this slide to display an image that didn’t exist until after we were married: 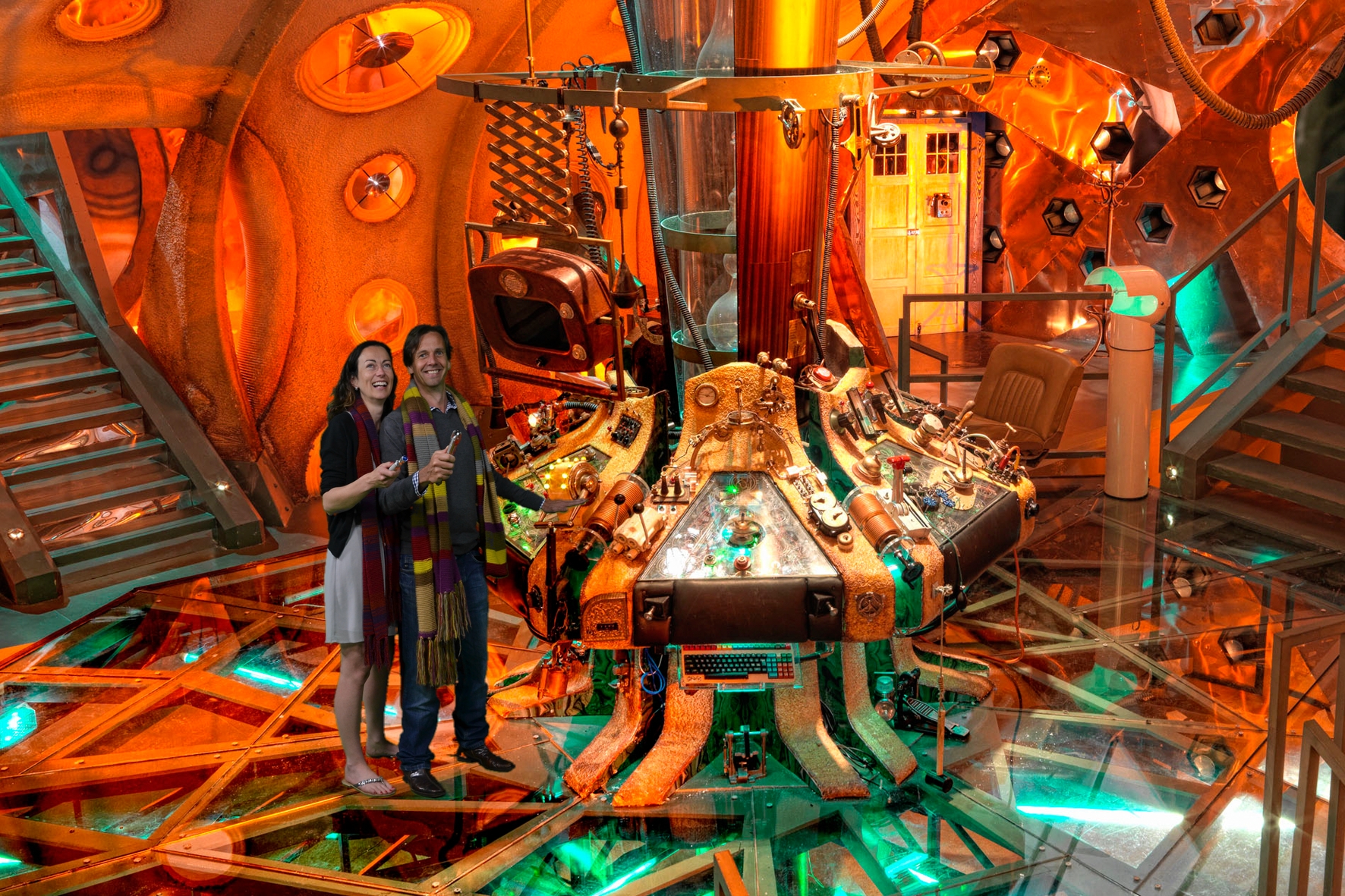 When future generations visit the event, or we do, the image will appear instead of the text.

Would people have been able to afford to attend without this technology?

Yes, people could attend in 2D from a desktop.

What was the officiant’s full name and how were they certified to perform the wedding ceremony?

Lisa from AltspaceVR was the officiant in VR (you can reach out to here on creds and she has them) and in the UK it was a lady named Helen Graham who is registered to conduct marriages.

How much of this was about your professional career at the company?

The engagement happened a couple of months before the wedding planning started. And at that time I was deep into a four month VR project for a client, so in that way, any exploration into VR storytelling would relate.
Then, once we decided to go the way of a VR wedding, making notes and experimenting as if it was client work.
Along the way we were approached by the BBC to be included in a documentary, which increased the complexity but improved how much we learned about filming in VR and storytelling IRL simultaneously.

What interests you about technology?

I’ve been writing about human communication since 1999 so when I see new tech emerge that connects people, helps them tell better stories, and has the potential to shift consciousness up a level I am interested. In terms of next steps, we are going to create comedy with one outcome…making Artificial Intelligence laugh, which should be a lot of fun.