Welcome to the Crazy/Genius School of Thought! 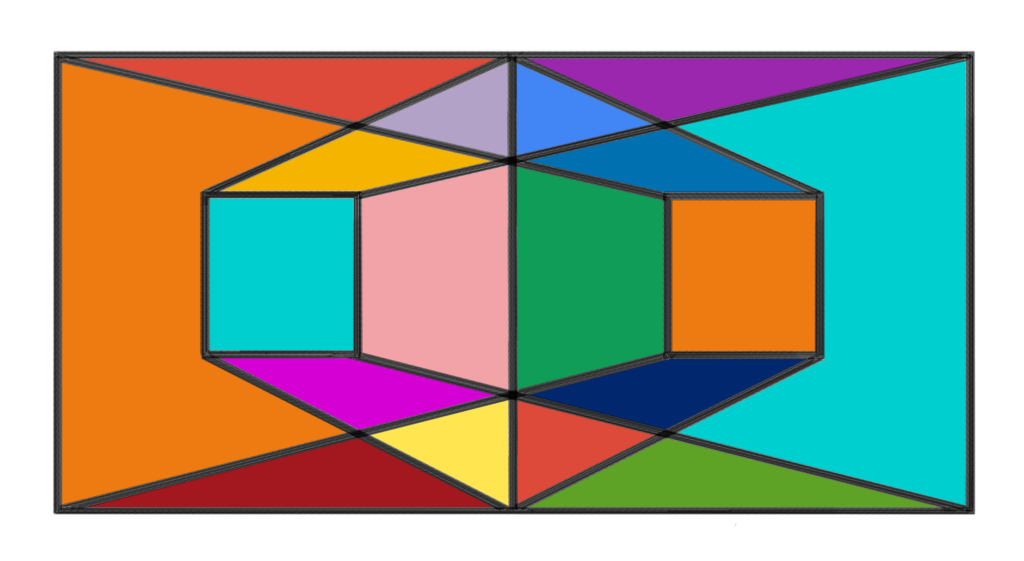 Here are a series of exercises for you:

1. Begin by drawing out 14 dots, like the image below: 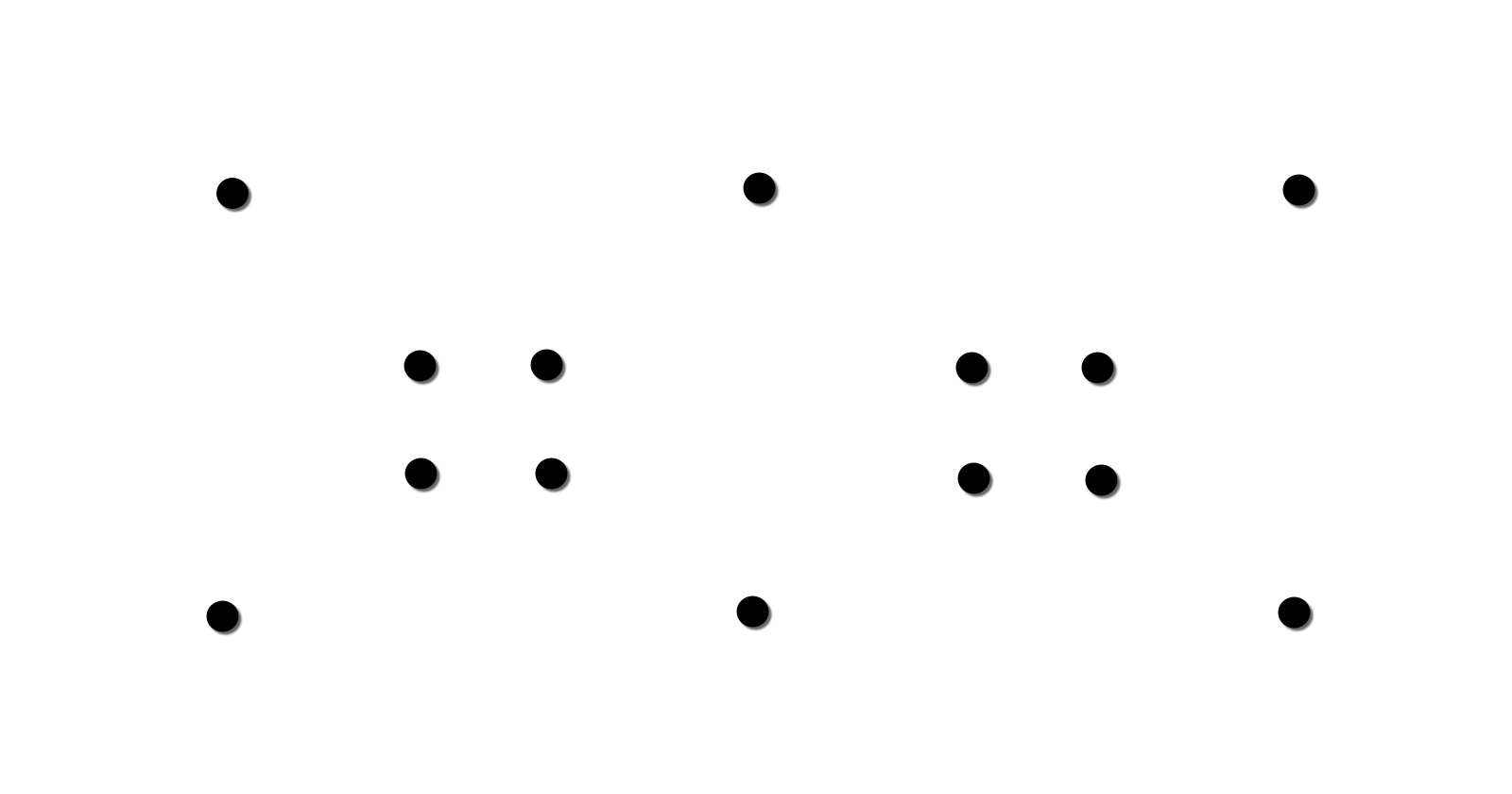 Then, without looking at the finished image. Connect the dots to create the same framework.

How long does it take you? How many times did you have to rub out and adjust the lines?

This image is somewhat counterintuitive to draw – it may well feel ‘wrong’ as you are connecting the dots in a slightly unusual way.

3. The picture is called: “The structure of consciousness?” (This sets a frame for the picture.) What do you see now?

4. Can you alternate between the left as a box, and the right as a box?

5. Can you bring the back to the front and the front to the back, on each side?

6. Looking at the middle area of the image. Can you see a room that is folded inwards? Does it fold outwards too?

7. Building on the exercise above, can you flick between these two perspectives? Does it happen spontaneously? Can you find the reason ‘why’?

8. Can you return to seeing the image as simply lines and flat surfaces? How long until your mind ‘gives it perspective’?

9. Take a look at the image below. Run through the exercises above to help create flexibility in your perception. 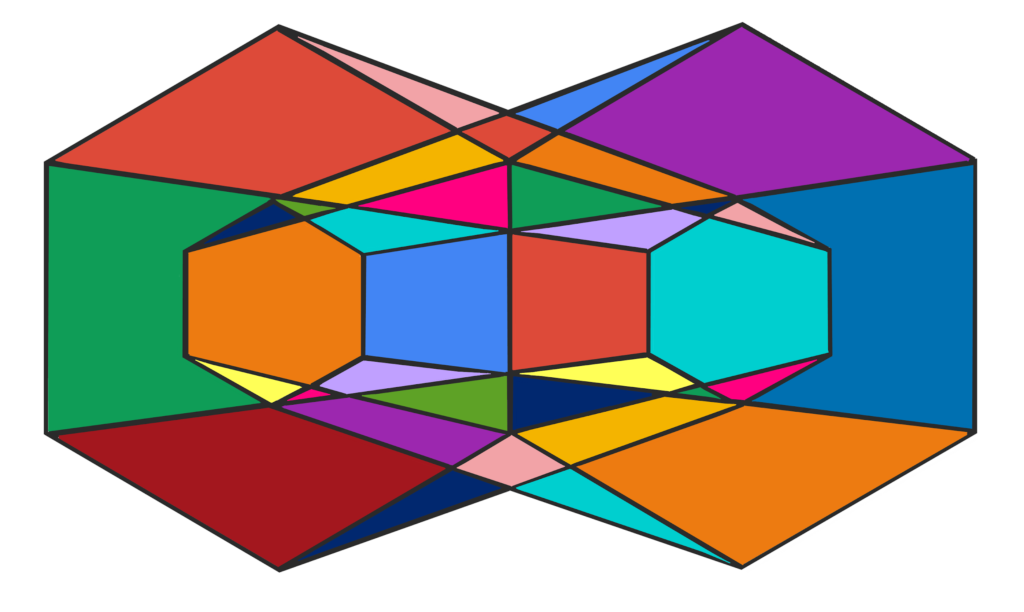 Now we move from perception to perspectives…

10. Your perspective is like a prism (pick left or right in the image). The further down the prism ‘you are’ (i.e. how much emotional/mental energy is being allocated) the more you are prisoner to your perspective. (Find ‘Sick Love’ from Red Hot Chilli Peppers for that reference)>

Next time a ‘strong emotion’ arises, note this as a movement deeper into the prism as a metaphor for the experience within yourself.

11. You have a perspective, and so do other people. The more people are invested in ‘their view’ the more they will push it onto you.
Note when someone else is pushing, or selling, their perspective.

12. Stepping outside of BOTH yours and their perspectives leads to ‘Ataraxia’, Equanimity.
You choose: let go/hold on

14. Taking this further…
Both ‘positive’ and ‘negative’ are perspectives you hold within yourself. Trying to ‘stay positive’ is not the aim. The aim is to step outside the duality of positive/negative.
Anytime you are positive, know it is a pull into a perspective. And so is being negative. Both are temporary and can create ‘a pop’ into the other very quickly.

15. Whether people ‘get something’ is often down to the probability they get the reference. You can look at a % likelihood based on everything from your relationship with them, their age/demographics, their interests.

16. Express your perspective, and then counter the perspective with an alternate view i.e. make yourself ‘wrong’.
Does a 3rd, alternative, perspective lead to a compromise? Or something totally new?

18. What ‘frames’ are you buying into?
Every time other people communicate with you, people are trying to influence your perspective.

19. If there are words, there is a perspective.
How accurately do you think you know their intent?

20. If there are thoughts, there is a perspective.

21. Know that facts are the thing that will free you from the prism of perspective. Facts are without positioning, facts are externally verifiable. But so often facts will be tainted with perspective in an attempt to ‘get somewhere’.

22. Humour frees you from the energy of a perspective. This is not about being more ‘positive’ and reducing the ‘negative’, it is about freeing yourself from both.

23. Note how the phrase ‘I can resist anything except temptation’ (and many others) are dependant upon resist/temptation as mutually dependant concepts.
Think about how you would map this to the image.

24. Draw a box and put another box in the centre.
Start with expectations, and think how they cannot exist without disappointment. Draw that box next to the first.
Next, connect the lines between the large and small boxes.

Note how you have added a conceptual layer of meaning to the original image. Taking you one layer deeper into the structure of consciousness.

25. Think of the image as scaffolding.
Leave the image aside and look at the concept of expectations/disappointment as ‘one unit’ in your mind. How does its texture feel?

26. Take another concept e.g. morality (consisting of right/wrong), how does that feel?
Flick in your mind between those two concepts. Notice the difference.

27. The boundaries you erect as to what is ‘this’ and what is ‘that’ are arbitrary. Everything is ‘form’ on the empty paper of the page.
Language is your matrix. Culture is your operating system.

28. What jokes do you consider to be ‘too far’ for you? I.e. what are not joking matters.

29. Which colours do you like most? Which attract you? Which avert you? What meaning do you attribute to each colour? How much of this meaning is personal/culturally conditioned?

30. Take the box and apply a problem to it. Where would you start? What would you place in each box?

31. Ask other people ‘what do you see?’ when you show them the first image. Is the response due to a) the interpretation of the image based on personal factors, b) the timing of showing them, c) something else?
It is often creative people who find they want to ‘play’ with the image more.

32. Tranquil is outside of the system. Disturbance is when you move your mind in a direction.

33. Take a problem you are having, and split it into two:
On the one hand…
On the other hand…

34. Does your inner dialogue stop when you stop trying to get anywhere?
How long can you listen without the need to say anything? Keep looking to extend this space.

35. What does ‘one’ need for the other to exist? How is this tension between these two things creating the pull in mind to take a perspective at all?
The hidden secret within ‘judgement’ is not ‘non-judgementalism’, it is ‘acceptance’.

36. Whenever you see a video clip with one idea that triggers a memory of another, capture it as a note.

37. How can one piece of information be combined with another to give a message that ‘goes beyond’ both?

38. What existing linguistic patterns can you use to express a current thought or feeling?

39. Look at the Crazy/Genius image on a screen/printed.
Imagine ‘walking’ your mind from the front to the back. Then from the back to the front, on each side – as if there were doors in the panels.

40. Close your eyes and imagine the Crazy/Genius image.
Imagine moving/rotating the image so that you look at it from behind.

41. Then move/rotate the image the other direction, again so you are looking at it from behind.

42. Next, imagine the 2D image as a 3D image, attempt to rotate it whilst still holding the integrity of the structure (which you have created i.e. you’ve never seen before).

43. Then see a ‘3D scene’ in the left (or right) boxes, whichever comes naturally, of a room in a house. Adjust the frame around the image so that you are inside it, within it yourself.

44. Look to your right (or left), see another scene in the small box connected to this one, zoom into it. What happens? Does the image collapse in some way?

45. When you ‘hold a concept’ notice where it is. Is it in your visual field of view, or is it in your heart?

46. Is the decision you are about to make based on fact, or opinion (perspective)? Facts exist on the surface.

47. Next time you find something funny, a) describe what happened in words, and b) imagine the scene. Notice the speed and ease and detail of each method. Which one packaged the information ‘better’?

48. Order/Chaos – imagine this concept in your mind. Notice how you can fluctuate it (in your mind) between being ‘ordered’ and ‘chaotic’, and yet somehow the movement (conceptually) between the two happens within a cohesive space in the mind.

This is just a starting point to loosen you up.
There will be many more ‘scene’ based exercises to be played with soon.