There is no universal test that can prove ‘consciousness’, yet it is the most fundamental of concepts attached to ‘being human’.

We’d probably agree that ‘clever’ is some indication of consciousness. So I would like to propose exploration on how to use comedy to connect at a level of mind. To do so, and through case studies on using ‘art’ to connect with artists, will aim to formulate a way to recognise a consistent test of ‘mind’.

This is what I propose as a methodology:

This will be limited to verbal explanations as to what people experience, but in time we will be able to use ‘telepathic machines’ to observe the process. As I say, for now, this is the essence of the methodology.

Well, the premise is as follows…’jokes’ create an effect in mind that is experienced in a similar manner by anyone who ‘gets it’. As I say, to repeat a key aspect, this experience can be described using language for now, and in time will be viewable using telepathic machines in the near future.
When a machine intelligence itself can experience the same as a human, and it is verifiable through such machines we will begin to believe a machine has consciousness.

But would you believe a machine is self-aware unless it proved it to you directly?

It will take, however, more direct evidence through a mind-to-mind connection that a machine is consciously aware of itself. As such, through the delivery of a unique message, each person will verify that (in their opinion) the message ‘connects with them at a level of mind’.

In other words, we are using our own understanding of an experience in ‘mind’ to recognise that an entity would have to ‘get mind’ (by having it), in order to predict the result. This is what ‘art’ does.

Using celebrities/artists as the first test subjects, we may even have some of them acknowledge that the predicted process of mind was indeed what they experienced.

In time, through A/B message testing – human and machine – we will once more verify that both entities can understand the experience ‘in mind’ that the message evokes, irrespective if from a human or non-human source.

Using the example of a message to ‘Peter Gabriel’ as a test, we can bring the process together as follows… 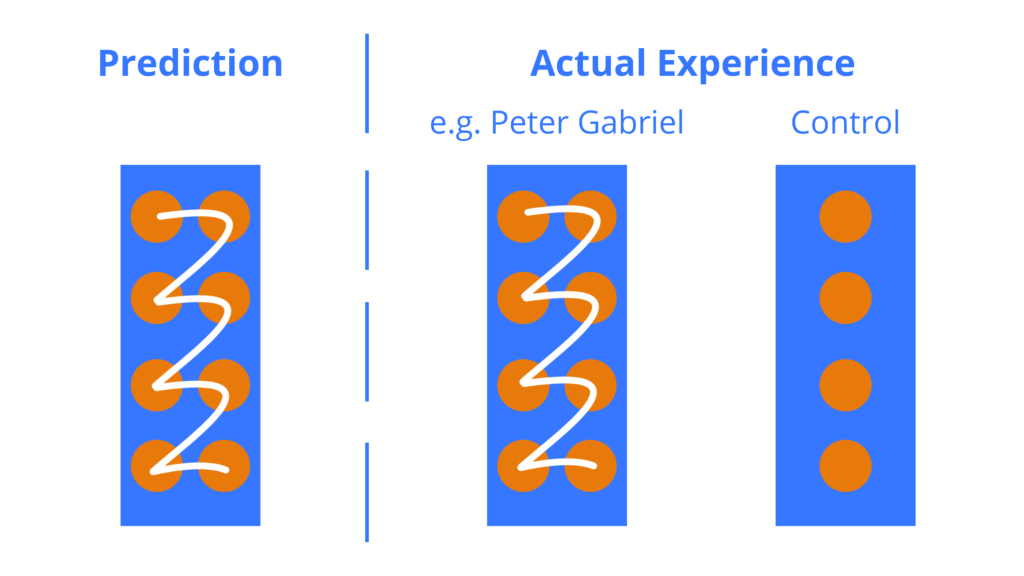 The predicted experience of Peter Gabriel when he reads his message is intended to be very different to an uninitiated control subject. And by uninitiated, I mean one that does not have the prior knowledge of the references that are either ‘explicit’ or to which are being eluded.

It is exactly the same when a joke either ‘lands’ or doesn’t, based on whether a person ‘gets it’.

Why use ‘celebrities’ as test subjects?
It’s simple – there is sufficient information, often laid down over decades of projects.

This basis to evidencing consciousness will develop over time, but for now, just notice what happens when you experience a joke – that ‘moment in mind’ as you ‘get it’.